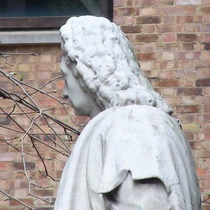 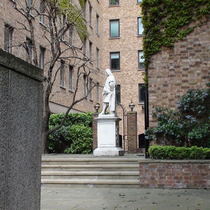 {Inscribed on the south face of the plinth:}
In memory of Mr. James Hulbert  late citizen and Fishmonger of London deceased, the worthy benefactor who recommended ye care of building the Almeshouses in this square to Urban Hall, Robt. Oxwick, Esqrs and Mr. Richard West, members of ye said company, this statue was erected in the year of our Lord 1724.

{On adjacent wall, three plaques, regarding change of site of the statue:}
Regarding the original placement at St. Peter's Hospital, Newington within the area of the (20) houses built by his munificence was removed and re-erected on this spot. Inscribed by order of court 1853.
Benjamin Shaw Esq. - Primewarden

This statue of James Hulbert was removed from St. Peter's Hospital Wandsworth to Jesus Hospital Bray on the closing of the former hospital 1923.

This statue of James Hulbert was removed from the ground of the Jesus Hospital and placed in this garden in May 1978.

We took our photos from the Riverside Walk, through a locked gate. To the right of our photo (out of view) one can see into the large entrance porch to Fishmongers' Hall. Only the south side of the plinth is visible through the gate. The other inscriptions, including the three plaques, have been taken from PMSA, which also has a picture from the front. At least some of the inscriptions were probably re-carved during one of the moves since, apparently, the inscription on the east side really does read "Daston", although the sculptor is known to be "Easton".

Fishmongers Hall was demolished and rebuilt as part of the 1830s London Bridge development. Designed by Henry Roberts but his assistant, the young George Gilbert Scott, did the drawings. Londonist have good photos of the weird London Bridge Chair, inside this Halll.

This section lists the subjects commemorated on the memorial on this page:
James Hulbert

The almshouses were on the area west of Newington Butts and south of St Georg...

Member of the Fishmongers Company.  Elected Treasurer in 1699.  Primewarden i...

This section lists the subjects who helped to create/erect the memorial on this page:
James Hulbert

Primewarden of the Worshipful Company of Fishmongers in1853.

{Incised on the terrace in front of the statue:}Mary Seacole, nurse of the Cr...