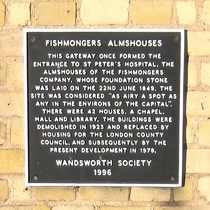 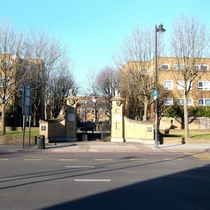 Fishmongers Almshouses
This gateway once formed the entrance to St Peter's Hospital, the almshouses of the Fishmongers Company, whose foundation stone was laid on the 22nd June 1849. The site was considered "As airy a spot as any in the environs of the capital".
There were 42 houses, a chapel, hall and library. The buildings were demolished in 1923 and replaced by housing for the London County Council, and subsequently by the present development in 1978.
Wandsworth Society 1996

The gateway piers bear the inscriptions 'London County Council' on the left and 'East Hill Estate' on the right.

This section lists the subjects commemorated on the memorial on this page:
Fishmongers' Almshouses

The almshouses were on the area west of Newington Butts and south of St Georg...

This section lists the subjects who helped to create/erect the memorial on this page:
Fishmongers' Almshouses

A community group with the aim of safeguarding the character, quality and int...

This tree was planted to the glory of god in praise and thanks for the life o...

We have found that the plaque was unveiled by the Mayor of Greenwich, but the...