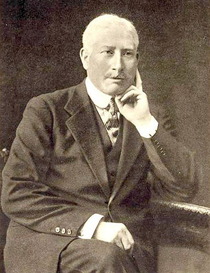 Financier, philanthropist, and art connoisseur. Born Berlin. Younger brother to Alfred and made his fortune the same way: mining diamonds. Came to London in 1896 and took British citizenship. Governor and benefactor to Imperial College of Science & Technology where he founded the Beit Fellowships for Scientific Research. Died at home at 49 Belgrave Square on his birthday.

2021: The Guardian reported that Imperial College's independent history group investigated the college's historical links to the British empire. The subsequent report has flagged up concerns over endowments from Alfred and Otto Beit and Julius Wernher, three of the college’s most important financial donors, due to the oppressive treatment of the largely Black migrant workers in the diamond and goldmines from which they made their fortunes. One recommendation is that the university rename buildings named after the Beit brothers.

This section lists the memorials where the subject on this page is commemorated:
Sir Otto Beit

"The munificence of his benefactions" - we just don't write plaques like that...

Born in Germany. Studied chemistry and then worked in factories, coming to En...