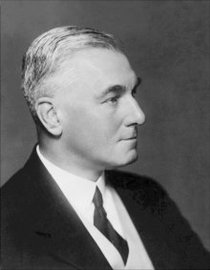 Forensic pathologist. Born Leamington Spa, son of a manufacturing chemist. He was a pioneer in the science of determining the cause of death by examining a corpse and gave evidence in many cases which attracted publicity and made him quite famous. His cases include: Crippen and the 'brides in the bath'. He was also key to 'Operation Mincemeat'.

However he was clearly not a 'team-player', refusing to share his methods, train others or submit to peer review. He rather steam-rollered his views through the courts and concerns about possible miscarriages of justice have been raised recently.

Of his three sons one died in the Blitz while working as a doctor at St Thomas's Hospital and one died of tuberculosis in 1945. Failing health and these two deaths are thought have contributed to Spilsbury's suicide by gas in his laboratory at University College.

This section lists the memorials where the subject on this page is commemorated:
Sir Bernard Spilsbury