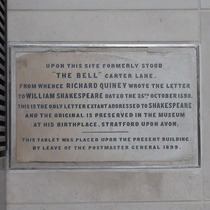 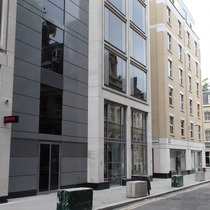 Upon this site formerly stood "The Bell", Carter Lane, from whence Richard Quiney wrote the letter to William Shakespeare dated the 25th October 1598. This is the only letter extant addressed to Shakespeare and the original is preserved in the museum at his birthplace, Stratford upon Avon.
This tablet was placed upon the present building by leave of the Postmaster General 1899.

From: the Devere Society: "1598 October - In the only letter ever discovered addressed to Shakspere at Stratford, one Richard Quiney writes a letter from the Bell Inn in Carter Lane, London, asking Shakspere for a £30 loan. It is written "To my Loveinge good ffrend & contreymann mr wm Shackespre" who "shall ffrende me muche in helpeing me out of all the debettes I owe in London I thancke god & muche quiet my mynde which wolde nott be indebeted". The letter, found in Quiney's papers after his death, was never sent to Stratford. (Shakespeare Birthplace Trust Records Office, MS. ER 27/4). "

For photographs of the letter and a full transcription see the Shakespeare Birthplace Trust.

When The Bell, then number 9, was demolished in 1889 this plaque was put on the wall of the Victorian Post Office building erected in its place. The plaque has carefully been preserved through at least one demolition and now adorns the current building, indeed is the only adornment on any of the buildings in our photograph - sometimes modern architect makes us want to . . . Yawn.

This section lists the subjects commemorated on the memorial on this page:
The Bell, Carter Lane

This section lists the subjects who helped to create/erect the memorial on this page:
The Bell, Carter Lane

Founded the United Wards Club and fought to have the Bell Inn plaque erected....