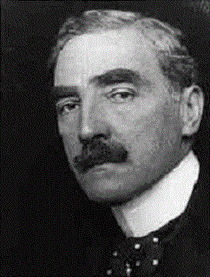 Metropolitan Police Commissioner 1903 - 1918, pioneer of fingerprint identification and saw the introduction of dogs into the force.

Born Shadwell. Trained for the Indian Civil Service and went there in 1873. 1891 appointed Inspector-General of Police of Bengal. 1896-7 oversaw the introduction of a system for classifying fingerprints which enabled them to be organised and searched. This method was implemented throughout India. 1901 he was recalled to Britain and put in charge of the CID where he immediately established the Fingerprint Bureau. 1903 appointed Commissioner of the Met. and carried on with other modernisations. Knighted in 1910.

In November 1912 an attempt was made on Henry's life at his home in Kensington, where the plaque is. The New York Times reports that Henry was attacked as he arrived home by car. Bowes, a cab driver whose licence had been refused fired and Henry was hit by a bullet before his chauffeur brought the gunman under control. The injury was serious but when Bowes was released from prison in 1922 Henry paid for his passage to Canada for a fresh start, (and maybe Henry felt safer with Bowes so far away). Died at home in Cissbury, near Ascot.

Background note: The licensing authority for cabs was the Public Carriage Office which was part of the Metropolitan Police.

This section lists the memorials where the subject on this page is commemorated:
Sir Edward Henry

The Namsos Campaign in Norway, was fought between Anglo-French/Norwegian forc...

We found more than one Roberto Arancibia who might be the one referred to on ...