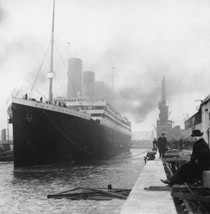 On board were over 2,200 people: 1,316 passengers and about 900 crew.  1,517 lives were lost, including W. T. Stead but not J. P. Morgan, nor Charles Lightoller nor Harold Bride.  The women and children were given priority in the life-boats and those for whom there was no room would have died from hypothermia in the freezing water.

Wikipedia lists memorials at: Belfast (where the ship was built), Liverpool (the port of registry and home to the White Star Line), New York City (destination port), Southampton (port of departure), Washington DC, Glasgow, Cohn/Queenstown in County Cork (last port of call).  there are memorials to to individuals lost on the ship in Southampton, Manhattan, Colne in Lancashire and Dumfries in Scotland. A statue of the captain, Edward Smith, was unveiled in Beacon Park, Lichfield in 1914.

Richard James Ellery was born on 19 April 1984 in Southampton, Hampshire, a s...