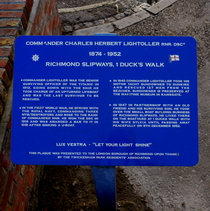 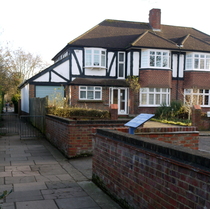 Commander Charles Herbert Lightoller RNR. DSC*
{Between an image of a ship's wheel and the flag of the White Star Line:}
1874 - 1952, Richmond Slipways, 1 Duck's Walk.

Commander Lightoller was the senior surviving officer of the Titanic in 1912. Going down with the ship he took charge of an upturned lifeboat and was the last survivor to be rescued.

In the first world war, he served with the Royal Navy, commanding three MTB/Destroyers and rose to the rank of commander RNR. He won the DSC in 1916 and was awarded a bar to it in 1918 after sinking a u-boat.

In 1940 Commander Lightoller took his motor yacht Sundowner to Dunkirk and rescued 127 men from the beaches. Sundowner is preserved at the Maritime Museum in Ramsgate.

In 1947 in partnership with an old friend and his surviving son, he took over the small boat building business of Richmond Slipways. He lived there on the boatyard at 1 Ducks Walk with his wife Sylvia until passing away peacefully on 8th December 1952.

This plaque was presented to the London Borough of Richmond upon Thames by the Twickenham Park Residents Association.

This section lists the subjects commemorated on the memorial on this page:
Charles Lightoller

In May 1940, British, French and Belgian troops were cut off on the French co...

This section lists the subjects who helped to create/erect the memorial on this page:
Charles Lightoller

Since the 1960s the association has sought to both enhance and protect the ch...

Gladstone served as Member of Parliament for Greenwich from 1868 to 1878.