Designer, entrepreneur and founder of the Urban Golf Tournament. Urban Golf seems to be exactly what you'd imagine it might be and has been played in the East End, Siena, Hong Kong, Canada and Venezuela. Greens were circles of carpet on the street, holes were open water gullies with a flagpole sticking out. Some yellow stencilled 'next tee' signs can still, in 2007,be seen around the streets of the East End.

Feakes died, aged 34 years, on 27 February 2007 after a fall onto concrete at his studio in Hoxton and his obituary in The Guardian newspaper gives much information about the man.

This section lists the memorials where the subject on this page is commemorated:
Jeremy Robert Feakes 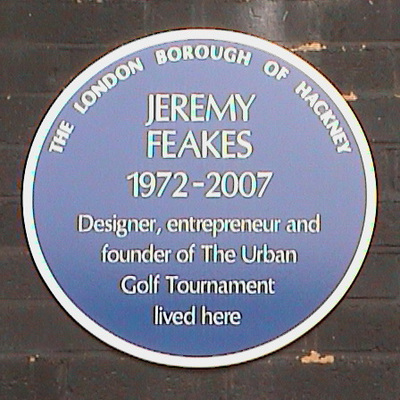 1878 architect of the Stratford Martyrs memorial.  For a time he worked with  William Jacques.