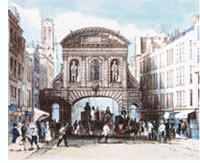 A bar is first mentioned in 1293, when it would have been a simple structure marking one of 8 entrances to the City of London. By this time the City was no longer confined within the London Wall, and this bar was at the point where Fleet Street now meets The Strand. The other 7 gateways (eee Cripplegate for the list) were all demolished and lost before 1800. This left just Temple Bar, erected in 1672, reputedly by Sir Christopher Wren.
To free up the traffic the arch was taken down in January 1878 and put into storage. It was bought by Sir Henry Meux and in 1889 re-erected as a gateway to his park and mansion at Theobald's Park near Enfield. In 1976 the Temple Bar Trust was formed with the objective of returning Temple Bar to the City. This eventually happened on 10 November 2004, to a site in Paternoster Square, next to St Paul's.

The Picture Source website used to give more details and pictures but, 2020, is defunct. But we see that Spitalfields Life have a c.1870 photo of Temple Bar in its original position with wooden scaffolding keeping it up.

This section lists the memorials where the subject on this page is commemorated:
Temple Bar

It was built for the Lord of the Priory of St John of Jerusalem. The site may...