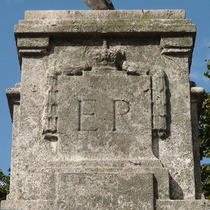 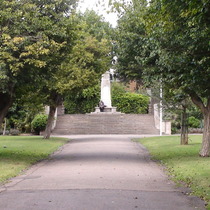 {On the main body of the monument, above and below what was a bronze medallion portrait of King Edward, now missing:}
In grateful memory of King Edward the Seventh this park is dedicated to the use and enjoyment of the people of East London for ever.
Opened by King George the Fifth, 1922.

{At the top, under a carved crown:}
ER

The main shaft is Portland stone and there is a useful granite seat around the base.  At the back there is a basin for the drinking fountain, long defunct, of course. The odd object atop the monument is a pigeon.

The memorial to Edward VII was composed of the establishment of this public park and the erection of the statue in Waterloo Place.

June 2012 we learn that Thames Water’s proposed Super Sewer (surely that's not its official name?) will require this park as a construction site for a number of years and would change the foreshore permanently. The locals are in fighting mode.

2018: A London Inheritance have done a splendid job researching the history of this area, pre-park.

This section lists the subjects commemorated on the memorial on this page:
King Edward VII Memorial

This section lists the subjects who helped to create/erect the memorial on this page:
King Edward VII Memorial

The memorial is now in the Borough of Lewisham. Deptford ceased to exist as a...