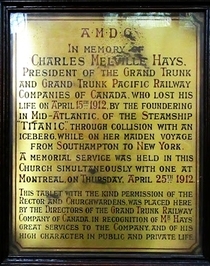 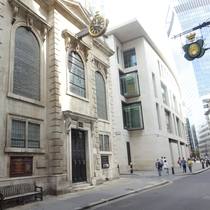 A.M.D.G.
In memory of Charles Melville Hays, President of the Grand Trunk and Grand Trunk Pacific Railway Companies of Canada, who lost his life on April 15th 1912, by the foundering in Mid-Atlantic of the steamship ''Titanic'', through collision with an iceberg, while on her maiden voyage from Southampton to New York.
A memorial service was held in this church simultaneously with one at Montreal, on Thursday, April 25th 1912.
This tablet, with the kind permission of the rector and churchwardens, was placed here by the Directors of the Grand Trunk Railway Company of Canada, in recognition of Mr Hays' great services to the company, and of his high character in public and private life.

A.M.D.G. stands for Ad Maiorem Dei Gloriam (For the greater glory of God). It is the motto of the Society of Jesus (Jesuits).

St Edmund the King church is now the London Centre for Spiritual Direction. We have tried to gain access to the building, but it has always been closed. Our photograph of the plaque is from Musings of a curious individual.

We wondered why a man born in America, living and working in Canada, had a memorial in the City of London. The answer is that his company was based in the City and he had taken the Titanic to return home from a visit soliciting financial support from the Board of Directors.

2021: A London Inheritance drew our attention to a building of the Grand Trunk Railway of Canada, Hays's company, in Cockspur Court, off Cockspur Street, an area which specialized in travel companies. The building is grandly named, in stone, twice, with the company name.

This section lists the subjects commemorated on the memorial on this page:
Charles Melville Hays

This section lists the subjects who helped to create/erect the memorial on this page:
Charles Melville Hays

This company operated in the Canadian provinces of Quebec and Ontario and sev...

2017: The plaque is no longer here (our photograph of it was taken some years...

The Clapham Sect. Members of the British anti-slavery movement met at Batters...