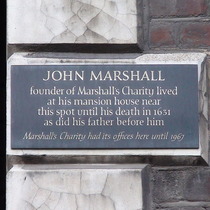 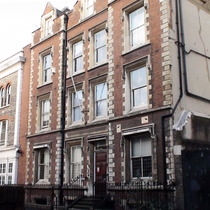 {Inscribed in Gothic lettering on a frieze across the front of the building, above the door:}
MDCFFOII John Marshall MDCCCLIII
{1627 John Marshall 1853}

This building was erected in 1853.

We had this entry in our puzzle corner for a while because of the Fs and O in the Roman numerals but Peter Kidd of manuscripts.org.uk confirms our interpretation that, in late-medieval script, these read as Xs and V so the date translates as 1627, the year John Marshall's will was written.

This section lists the subjects commemorated on the memorial on this page:
John Marshall

{On a plaque on the ground to the north:} This fountain has been refurbished ...

The plaque is located in the foyer of the New Diorama Theatre.