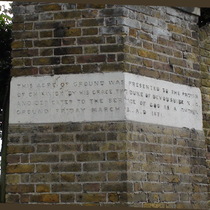 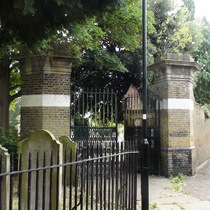 This acre of ground was presented to the parish of Chiswick by His Grace the Duke of Devonshire KG and dedicated to the service of God as a burial ground, Friday March 3 AD 1871.

Nearby Chiswick House was in the Cavendish family, 1758–1929, which explains their association with this church.

The church's website says: "The Churchyard was Chiswick’s only burial ground for many centuries. It was closed in 1854 because of lack of space, except for limited burials in existing vaults. For the next twenty years people from Chiswick were interred outside the parish. It was re-opened in 1867. The Duke of Devonshire gave to the parish gifts of land adjoining the churchyard for enlarging the burial ground in 1838 and 1871."

This section lists the other memorials at the same location as the memorial on this page:
St Nicholas churchyard extension - north gate - north gate, west pier

David Hopkins, our Latin consultant, has again applied his skills and provide...