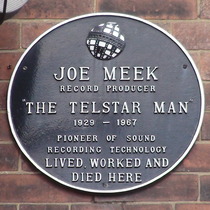 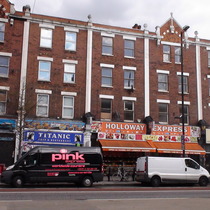 This plaque can be seen in our photo, slightly obscured by a satellite dish (oh, the irony).  The day we visited was 15 April 2012, which happened to be the centenary of the sinking of the Titanic.  We were delighted to see that the cafe next door to this plaque was celebrating the demise of its namesake with balloons and 50% off.

From Deep Purple: Meek set up his studio here in 1960. He lived on the first floor where there was also an office.  The studio and control room were on the second floor.  The third floor had a bedroom and 2 other rooms sometimes used for recording.  The ground floor shop was Shenton’s shop, selling bags and leather goods.

Exterior shots in the 2009 film 'Telstar: the Joe Meek Story' were filmed in Holloway Road.

This section lists the subjects commemorated on the memorial on this page:
Joe Meek

Record producer, e.g. 'Have I the right'.  Born Robert George Meek in Newent ...

This section lists the subjects who helped to create/erect the memorial on this page:
Joe Meek

The trustees of the London Parochial CharitiesThis building was opened by Her...