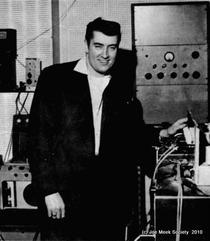 Record producer, e.g. 'Have I the right'. Born Robert George Meek in Newent Gloucestershire, where there is a plaque. First truly independent record producer. 'Telstar' for The Tornados was the first British instrumental record to reach number one in Britain and America. Also recorded many other artists including: Honeycombs, Gene Vincent, Billy Fury, Jess Conrad, Petula Clark, Lonnie Donegan, etc. Committed suicide at 304 Holloway Road, after first shooting dead his landlady following a rent dispute. This was on the 8th anniversary of Buddy Holly's death which some people find significant.

This section lists the memorials where the subject on this page is commemorated:
Joe Meek

{Below an image of the communications satellite, Telstar} Joe Meek, record pr...

From the website: "We promote the music of Benjamin Britten and his work with...

Musical composer. Born Dublin (in a street which is now named after him). W...