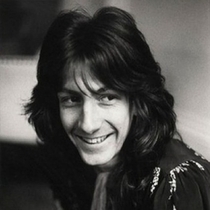 Born Eltham as Stephen Ross Porter, His new name came from The Hobbit. Original founder in 1967 of Tyrannosaurus Rex with Bolan. Died, aged 31 years, after choking on a cocktail cherry at home at 100 Cambridge Gardens, W10, though drugs may have had something to do with it.

2017: Fee Warner writes (and we have no reason to disbelieve her): "Please Note: He was not living at 100 Cambridge Gardens, when he died. He was living at 14 Clydesdale House, 255 Westbourne Park Road."

His Wikipedia page also confirms his home as 14 Clydesdale House, 255 Westbourne Park Road, London, W11 1ED and our colleague, Andrew Behan, also informs us that he was buried on 5 November 1980 in Kensal Green Cemetery, Harrow Road, London, W10 4RA. He also states that probate records confirm the Clydesdale House address as his home and that it was not until 10 years later, on 25 October 1990, that administration of his estate was granted. It was valued at £7,000.

This section lists the memorials where the subject on this page is commemorated:
Steve Peregrin Took

Composer of light music, e.g. "The Dambusters March" for the film and "Sleepy...

Singer and record producer. Born Aldershot as Michael Hayes. Worked as a si...

Three members of the group: Barry Gibb and his brothers, the twins Robin &amp...