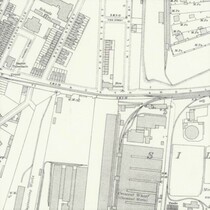 The chemical factory was built in 1893 by Brunner Mond. In 1915 the War Office took over part of it (the northern section, we think, where Banyan Court now is) to produce TNT in what was known to be a very dangerous process, in a very built-up and populous area.

The explosion, preceded by a fire, occurred at almost 7pm on a Friday evening. 73 people were killed, about 400 injured, and many buildings in the local area was destroyed or damaged. The explosion was heard as far away as Sandringham in Norfolk. It was the biggest explosion ever in London.

Our image is a 1914 map showing the "Crescent Wharf (Chemical Works)" where the explosion occurred, south of the North Woolwich Road; the Fire Station which was destroyed; and St Barnabas "Missn Ch" which was badly damaged. This 1900 map shows the works labelled with "Brunner Mond" and "Caustic Soda". Neither map shows the "melt-pot" room which was the source of the fire which caused the explosion.

The Conversation has photos showing the damage.

Two of the names on the monument (Angel and Wenborn) are listed with 'Edward Medal'.  This is not a medal we had met before so we looked it up. Wikipedia explains: It was a British civilian decoration, instituted in 1907 to recognise acts of bravery of miners and quarrymen, endangering their lives to rescue their fellow workers. Named in honour of King Edward VII. In 1909 it was decided to encompass acts of bravery by all industrial workers in factory accidents and disasters, so there were then two versions of the Edward Medal: Mines and Industry. Discontinued in 1971 it is one of the rarest British gallantry awards (395 Mines and 188 Industry).

Wikipedia says "73 people were killed (69 immediately, and four later from their injuries)." The monument acknowledges 58 residents and 16 employees, which adds to 74. Wikipedia also says "several professional firemen and volunteers fighting the earlier fire were killed" but that's all. One has to assume their number is included in the "58 residents" but it seems odd that it is all so vague.

This section lists the memorials where the subject on this page is commemorated:
Silvertown explosion