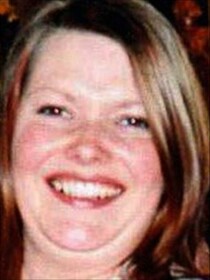 She married David Hartley and their marriage was registered in February 1996 in the Hyndburn and Rossendale registration district, Lancashire. They had two children: Liam John Hartley (b.1997) and Aidan David Hartley (b.2003).

Living in White Ash Lane, Oswaldtwistle, Accrington, BB5 3JG, she was a digital studio manager. An obituary can be found on our picture source.

She was killed, aged 34 years, on 7 July 2005 whilst travelling on the upper deck of a Route 30 bus that was targeted by a suicide bomber at Tavistock Square. The narrative verdict of her death can be found on the Coronor's Inquest Report.

This section lists the memorials where the subject on this page is commemorated:
Marie Joanne Hartley