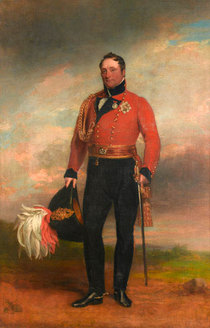 Born Shropshire. Served in the Napoleonic Wars. 1830 - 42 Colonel of the Royal Regiment of Horse Guards (The Blues). The Horse Guards were part of the Household Cavalry and were based at Knightsbridge Barracks, now Hyde Park Barracks. Which explains why we think the "Hill" bust on display at the Hyde Park Barracks is this Rowland Hill. Also it does look a bit like the face in the Wikipedia portrait. Outside Shropshire County Council's offices in Shrewsbury is a column with Hill's statue on top.

Not to be confused with Sir Rowland Hill of the Post Office nor Rev. Rowland Hill, referred to here, not the first Protestant Lord Mayor of London, Rowland Hill (1495-1561). There's another Rowland Hill at the top of another column, in Hawkstone Park, Shropshire, but we've rather lost track of which one it represents, we don't think it's our one.

This section lists the memorials where the subject on this page is commemorated:
Rowland Hill, 1st Viscount Hill

{On a small brass plaque attached to the plinth:} Hill

Born in Essex House.  He was the son of Queen Elizabeth's Essex, and the last...