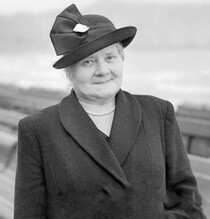 Poplar councillor imprisoned during the 1921 rates protest, at which time she was 6 months pregnant.

Nellie Frances Wilson was born on 23 November 1882 in Kilburn, the eldest of the four children of John George Wilson (1858-1898) and Julia Wilson née Jennings. Her father was a carpenter. The 1891 census shows her living at 8 Eagle Terrace, Norman Road, Leyton, Essex with her parents, her sister Annie Edith Wilson (1885-1961) and brother John George Wilson (1887-1918). Her youngest brother, Thomas Henry Wilson was born in 1892.

In the 1901 census she is shown as a ironer at a laundry living at 87 Vansittart Road, Cann Hall, Leyton, with her widowed mother and her sister, who were also listed as ironers, together with both brothers.

They initially lived at 15 Barnes Street, Limehouse, but moved in 1906 to 27 Tomlins Terrace, Limehouse, and the following year to 111 Rhodeswell Road, Stepney. The 1911 census shows her residing at 3 Lee Street, Limehouse with her husband and four sons. His occupation was given as a general labourer at an 'oil & color works'. By 1914 the family had moved to 82 Hind Street, Poplar. They finally settled at 15 Macquarie Way, Isle of Dogs in 1923.

Both she and husband were Labour Party councillors in the Metropolitan Borough of Poplar and were committed to prison for contempt of court on 5 September 1921 along with 28 other councillors and whilst she was released on 21 September 1921 her husband and the others were not released until 12 October 1921. The 1939 England and Wales Register confirms her still living with her family at 15 Macquarie Way and she served as the Mayor of Poplar for the 1943-1944 year of office.

This section lists the memorials where the subject on this page is commemorated:
Nellie Cressall

The mural refers to "30 councillors" but actually names only 29. The count o...

Member of Parliament for Ashton-under-Lyne, Lancashire from 1835 until his de...