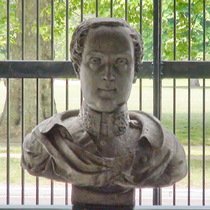 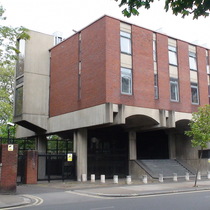 {On a small brass plaque attached to the plinth:}
Hill

Inside this building on the upper-ground floor there are 4 busts - 2 in the foyer area at the entrance from the pavement (at the west) and 2 in the foyer area at the entrance from the car-park (at the east). From South Carriage Drive one has a very clear view - of their backs. From the front, Kensington Road, by going up the steps and peering in through the railings one can see the 2 at the west but they are in deep shadow, hence our less than excellent photos. We can just read their identifying plaques and Hill is on the left (west) of Londonderry. The 2 on the east cannot be seen from the front at all so we have used their back view.

Also from South Carriage Drive one can see, in the car-park entrance, a horse's head on a pedastal, but no explanatory plaque is visible. We're guessing it also came off the old building and that it does not represent a particular horse (important for us since if it did we'd treat it as a memorial and try and find out which horse.)

From British History On-line: "Separated from the maisonettes {to the east} by a narrow space is the Officers' Mess, also built over a car-park. The main entrance hall is at upper-ground level, and beyond its glass walls and doors are placed the stone busts of Somerset, Raglan, Londonderry and Hill from the park front of the former officers' quarters, mounted on tall plinths (Plate 45a, 45c). Never having been designed to be seen at such close quarters, they have a rather startlingly crude appearance, with little differentiation in their features beyond the varying length of their sideburns."

And from British History on-line (describing the previous building): "The park façade was the most ornate of all the elevations of the three main blocks, with the greatest concentration of sculptured decoration. As on the Knightsbridge front, the centrepiece was tightly proportioned. A bow window on the ground floor, with a balcony over, was flanked by an attractive garden terrace (Plate 41b). Carved portrait heads of former army commanders – Wellington, Marlborough, Combermere, Anglesey and Oxford – gazed from laurelwreathed niches over the bow window. Busts of four more military worthies – Somerset, Raglan, Londonderry and Hill – perched on brackets on the wall to either side. These last have been preserved in the officers' mess of the present barracks (Plate 45a, 45c) {and have since been moved to the foyer}." Canmore have a photo of the building which shows the bow window and you can see the busts, as described.

For the history of the three incarnations of these barracks see Hyde Park Barracks.

This section lists the subjects commemorated on the memorial on this page:
Hyde Park Barracks - Hill

This section lists the other memorials at the same location as the memorial on this page:
Hyde Park Barracks - Hill

{On a small brass plaque attached to the plinth:} Londonderry