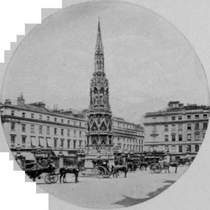 Queen Eleanor of Castile died near Lincoln, with her husband, King Edward I, at her bedside, and was to be buried in Westminster Abbey. The crosses were erected at each of the overnight stops her funeral procession made on the journey, the King accompanying it the whole way.

The Charing Cross, 70 foot high, was the "best" of them all, in size, grandeur and cost. It was marble; the others were stone or wood. It was pulled down by order of Parliament in 1647, when royalty was out of favour. Only three original crosses remain: Geddington, Hardingstone and Waltham Cross.

The current Charing cross, a Victorian Gothic re-imagining by architect Edward Middleton Barry and sculptor Thomas Earp, was erected in 1863-5 by the South Eastern Railway Company when they built Charing Cross Station, as the centrepiece of the hotel forecourt. Drawings and fragments of the original are held by the Museum of London.

Another London Queen Eleanor’s Cross stood in the City at Westcheap.

See History and Traditions of England and Seiyaku for more information.

This section lists the memorials where the subject on this page is commemorated:
Queen Eleanor’s Cross

Architect and furniture designer. He studied at Bauhaus, and was initially re...