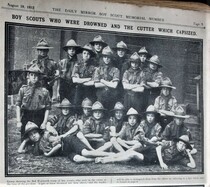 Percy Baden Powell Huxford is the 2nd from the right of the seven boys sitting in the photograph of the scout troop.

On 27 October 1902 he, together with his three siblings. were baptised at St Peter's Church, Walworth, where the baptismal records not only inform us of his date of birth but confirm that the family were still residing at 88 Portland Street and that his father was a "carrier".

When his father completed the 1911 census return form he was shown as living in 4 rooms at 163 Portland Street, Walworth, with his parents and seven surviving siblings: George, Isabella, Lilian, Florence Maud Huxford (b.1902), Isabella Huxford (1904-1987), James Edward Huxford (b.1907) and Henry Albert Huxford (1910-1946). His father described himself as a "Butcher Smithfield worker". The census form also shows that only 8 of his 9 siblings were still alive. Another sister, Violet Louise Huxford (1911-1953) was born on 7 June 1911.

He was named after, but not related to Lord Baden-Powell. One wonders how his parent felt about Baden-Powell after the tragedy.

This section lists the memorials where the subject on this page is commemorated:
Percy Baden Powell Huxford