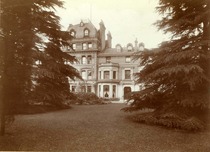 See Lost Hospitals of London for an excellent history of this hospital. Briefly: The White House, a mansion with 5 acres of grounds, was built in 1866.  Dr Langdon Down and his wife Mary bought it and named it Normansfield, after their solicitor (!).  It opened in May 1868 as a private asylum for children with mental health problems from upper class families.  The children were taught according to their abilities and the hospital expanded with new wings and out-buildings.  A splendid Entertainment Hall was built and opened in 1879 (still exists and is regularly open to the public).  By 1888 the hospital covered 40 acres.  The Langdon Down’s two sons both qualified in medicine, worked at Normansfield and took it over when their parents died in 1896-1900.

Normansfield transferred into the NHS in June 1951 but the family continued their involvement.  We have to mention that a grand-daughter married a neurologist, Dr Russell Brain (nominative determinism rules! - see Isambard Brunel for more examples).

This section lists the memorials created by the subject on this page:
Normansfield Asylum