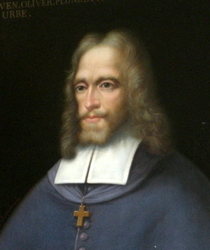 Archbishop and saint. Born Ireland, admitted to the Irish College in Rome and ordained in 1654. He was appointed Archbishop of Armagh and Primate of all Ireland in 1669, but because of the suppression of Roman Catholicism in Ireland by Oliver Cromwell, he didn't return home until 1670. Implicated in the Popish Plot in 1678, he was brought to England for trial in Westminster Hall and eventually hanged at Tyburn. Canonised in 1975.

He wasn't just hanged, he was also drawn and quartered. The pieces were distributed and moved about over the years so Wikipedia reports the current locations as being: Downside Abbey England, Ireland, Germany, France, US and Australia, with the head in Drogheda Ireland. Discounting the head that's 6 locations, so the quarters must have been further sub-divided.

This section lists the memorials where the subject on this page is commemorated:
Oliver Plunkett

{On the mosaic:} St Oliver Plunkett pray for us. {On the plaque:} Saint Oliv...