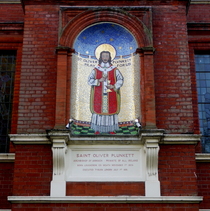 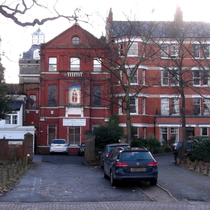 {On the mosaic:}
St Oliver Plunkett pray for us.

We think this chapel is/was closely associated with the school, St Francis Xavier College, behind.  Plunkett himself had no connection to Clapham, having spent all his life, until his trial, in Ireland.

A Facebook page contains some photos of the interior of the building and this, copied from Wikipedia: “As a spectacle alone, the rally and Mass for St Oliver Plunkett on London's Clapham Common was a remarkable triumph. As the Common was invaded for a celebration of the 300th anniversary martyrdom of St Oliver Plunkett. Cardinal 0 Fiaich , twenty enrobed bishops and a handful of abbots stood on a stage beneath a scaffolding shelter that shuddered in the wind on the 1st July 1981. The Archbishop of Armagh flew over in a helicopter with Oliver Plunkett’s body. It was a sort of dry run for the Pope's visit. This occasion attracted thousands of pilgrims to the park and this people's celebration masterminded by Fr Martin Bennett was a first for the parish of the Holy Ghost, Balham and which also boasts the first British chapel dedicated to St Oliver.”

This section lists the subjects commemorated on the memorial on this page:
Oliver Plunkett

Archbishop and saint. Born Ireland, admitted to the Irish College in Rome and...

{On the broken piece of stone to the upper right:}King's Cross Station concou...