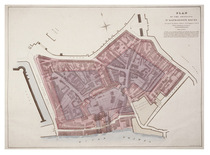 Full name: Royal Hospital and Collegiate Church of St. Katharine by the Tower.

This was a medieval church and hospital founded by Queen Matilda of Boulogne, wife of King Stephen. From 1273 onwards patronage was always held by the queen.  By the nineteenth century it had grown to a village providing refuge to immigrants and to the poor. Considered insanitary and located close to the City this was the site chosen for new docks. This happened during a period that there was no queen available to be patron and so, unprotected, "old Kate" was demolished. The Docks company funded the construction of a chapel and other buildings in Regent's Park.

1948 some buildings were badly damaged by bombs, the Foundation was reconstituted as the Royal Foundation of St Katharine and decided to return to the East End, to the war-damaged site of St James Ratcliff.  The Regents Park church was sold to the Danish Church. The complex story is told very well at our picture source and at the Royal Foundation of St Katharine (2022: both sites now inaccessible.)

This section lists the memorials where the subject on this page is commemorated:
St Katharine by the Tower / Royal Foundation of St Katharine

A Church of England missionary organisation (no surprise), created because th...