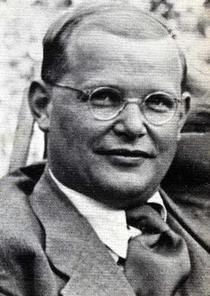 Born Breslau, now in Poland. He studied in the USA, returned to Germany in 1931 and was ordained as a Lutheran pastor in Berlin. He openly opposed the rise of Hitler but was disappointed at the lack of support so he accepted a 2-year appointment in London.

He returned to Germany where the Nazis opposed his teachings so he ran underground seminaries. He made contact with the German resistance in 1938 but then briefly returned to the States. Feeling a duty to be in Germany he returned and again the Nazis restricted his activities.

He joined the Abwahr, a military intelligence group, officially pro-Nazi but also a centre of resistance and where the assassination of Hitler was planned. (Why the Nazis accepted him is a mystery to us.) In 1943 he was, with others, arrested and eventually executed by hanging.

This section lists the memorials where the subject on this page is commemorated:
Dietrich Bonhoeffer

Had been one of the group who arranged for the execution of Simon Burley.  Ki...