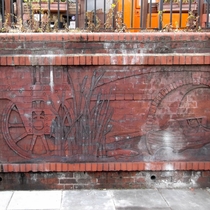 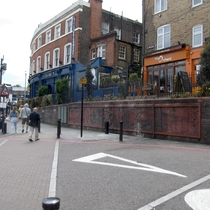 {Panel 1:}
A Brief Local History
In medieval times this area was known as The Forest and was part of of the Great North Wood. It was largely used for hunting & charcoal burning.
1545 Henry VIII sold 40 acres of the wood to John Pope £1551, During the 1790s the first recorded settlement occurs & use of the name Forest Hill.
The spire of a Wren church was moved from the city in 1830 by Robert Harrild who having bought it for £5 had it erected in his garden at Round Hill where it still stands.
1901 Forest Hill public library opened. It was the first library to be purpose built in Lewisham.
1909 The Rink Cinema in Silverdale first opened as a roller-skating rink which also showed films.
1910 The Picture Playhouse opened. It became the Empire Picture Theatre but closed in 1911. The auditorium is still standing at the back of a shop in Dartmouth Road.
1929 The Capitol Cinema opened featuring a distinctive art deco facade with Egyptian motifs and blue and yellow tiles.
1939 - 1945 German planes jettisoned unused bombs on return flights. A VI rocket severely damaged the railway station, the Dartmouth Arms & Chalks the butchers in 1944.

{Panel 2:}
Forest Hill Transport
1786 A large section of local woodland was purchased by Samuel Atkinson who built what is now known as Honor Oak Road & sold building plots.
1809 The Croydon Canal Co opened a canal from Croydon to the Thames. Its 28 locks made it slow to use and it was commercially unviable. This brick wall is on the site of the first canal wall.
1810 The Enclosure Act allowed freeholders to divide up the land.
1836 The London and Croydon Railway Company drained the canal & built the railway along its bed. Once the railway reached Forest Hill the area developed rapidly and the population doubled within fifteen years.
1846 The Atmospheric Railway opened using stationary engines to provide compressed air to a tube laid within the tracks. Each carriage had a piston that entered a slot in the tube. As air was sucked from the tube the carriages were drawn along the track. The line closed in 1847 partly due to rats which gnawed the leather seals on the tube.
1915 The tram line which had terminated at the junction of Devonshire Road & London Rd was extended to Catford. The highway under the railway bridge, now the South Circular, had to be lowered to allow the double decker trams to pass underneath.

{Panel 3:}
People & Personalities
Elizabeth I is said to have rested beneath the oak tree on Honor Oak. Locals remembered her by honouring the oak every May day. this custom gave the area its name.

In the 19th century the admiralty used it during the Napoleonic wars as a beacon hill.

Frederic John Horniman, the wealthy tea merchant, lived at 100 London Road and in 1888 gave public access to the his expanding collection of art, handcrafts & natural history. The house was demolished & replaced by the Horniman Museum designed by C Harrison Townsend & completed in 1901. The museum and 27 acres of parkland were presented to London County Council as a gift to the people of London.

Ted Christmas was a leading local builder at the turn of the century. 17 Christmas houses survive in Perry Vale.

Dietrich Bonhoeffer the well known theologian and martyr against fascism was pastor of the German church in Dacres Road and he lived in Manor Mount between 1933 and 1935.

The memorial comprises a mural and three panels of text. The wall on which it is located is part of the towpath of the former Croydon Canal.

This section lists the subjects commemorated on the memorial on this page:
Forest Hill mural

Builder. Born Edward Charles Christmas in Lewisham. He set up his business ar...

This section lists the subjects who helped to create/erect the memorial on this page:
Forest Hill mural

{Four plaques to the right of the mural:}Creekmouth Heritage ProjectAbout thi...