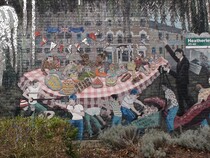 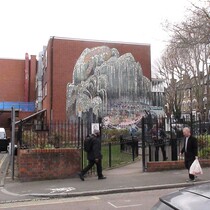 {In the leaves at the top left of the tree:}
The Island

{On the side of the wheelbarrow:}
Clearing the Rubbish November '78.

{On an implement in the hands of the workman filling the wheelbarrow:}
FF '80.

{On a similar implement in the hands of one of the other workers:}
FF '06.

{On the left-most house, on banners either side of a Union Jack:}
Silver Jubilee

This mural repays some examination. Firstly, looking at the buildings in the background at the top: those at the right, with the 'Victory in Europe' banner, these are the two-up, two-down style of housing in The Island. The buildings in the middle are slightly grander, three storey houses, which we don't think existed in The Island. Those at the left, with the 'Silver Jubilee' banners, are in a c.1930s style, again, foreign to the Island we think.

In the middle ground is a street party illustrating what happened all over the country, and presumably in The Island, in both 1945 and in 1977. The photographer looks like a portrait, but of whom? Possible the mural artist?

In the foreground are 8 men 'clearing the rubbish'.  We don't know whether this refers to the rubble left from the demolition of the houses in The Island in the 1970s, or to the preparation of this space so that the garden could be created.  Some of the men are tending a sort of big flexible pipe. They seem to be pushing the contents of the wheelbarrow into its 'mouth' while out its 'tail' end (outside our photo, to the right) billow flames and smoke. We can't explain this.

At the left are two figures who are not working. Possibly the person in the bobble hat is photographing the woman who is striking an uncomfortable pose, or is pregnant, we are not sure.

The two 'FF's with dates - we wonder if these refer to times when the mural has been repaired, and that F. F. are the initials of the artist/restorer.

With all these unanswered questions we've put this mural in our Puzzle Corner, and hope someone will come forward with some explanations.

The bushes and the railings rather spoil the view of this mural. The mirror fragments used for the upper leaves of the willow tree capture the sense of shimmering sunshine very well, even on the overcast day on which we visited.

This section lists the subjects commemorated on the memorial on this page:
The Island mural

This 1870 map shows that the land between Stoke Newington Common and Hackney ...

This section lists the subjects who helped to create/erect the memorial on this page:
The Island mural