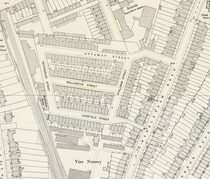 This 1870 map shows that the land between Stoke Newington Common and Hackney Downs, to the east of where the railway was to be built, was entirely undeveloped and occupied by three large areas, each labelled "brick field".  This was all built up with houses in the next few decades, as shown in the 1895 map, a section of which we include here. This shows 5 streets, which can only be accessed from Rendlesham Road - an urban island.

The Hackney Gazette suggests that there was an arrangement whereby residents approaching from the north, not wishing to go the long way round, could pass through one of the properties on the border in return for a penny. The maps shows that those living at either end of Ottaway Street may have been able to benefit from this additional income.

We don't know when, but by the time of the 1936-9 map both Heatherley Street and Stellman Street had been cut through to join Everling Road, and, though most of the houses remained, The Island was no more. Then in 1970 the houses were demolished to make way for new housing, Stellman Close. Interesting that this is laid out so as to recreate some of the Island-like characteristics.

The Hackney Gazette describes how odd the area was and refers to some books and audio walks about it. There are photos of the streets and the people.

An explanation for how The Island came to be may be found in the 1870 map. The border of the most southerly of the brick fields coincide with the borders of The Island.  It's as if that brick field was developed first without any expectation that the area to the north would also be developed.

We hunted around but could find no remains of the area, nor any references, apart from the mural, and 'Island Metals' - a scrap metal merchants in Rendlesham Road.

This section lists the memorials where the subject on this page is commemorated:
The Island

This mural repays some examination. Firstly, looking at the buildings in the ...

As so often happens, this group was formed to campaign against the proposed d...