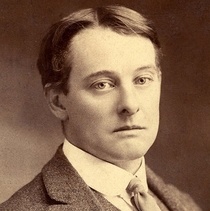 Journalist and poet. Son of the Marquess of Queensbury and lover of Oscar Wilde. Known as Bosie (a nickname given to him by his mother as a derivation of 'boysie'). After Wilde's release from prison, the couple briefly lived together in Naples. He married Olive Custance in 1902, with whom he had a son, Raymond. In 1923 he served six months in prison for libelling Winston Churchill. The phrase "the love that dare not speak its name" is from Douglas, aged 22, not Wilde.

2021:Patrick M. B. Hinchy told us that Douglas lived for 10 years (1935-44) by St Ann's Well Gardens in Hove, East Sussex, and that he died at a farm in Sompting, close to Lancing in West Sussex. He drew our attention to this LA Times piece: about the death of Douglas's last friends: "In December 1944, the widowed Douglas accepted the couple’s {Sheila and Edward Colman} invitation to stay at their farm. The Colmans cared for Douglas at their home until he died of heart failure in March 1945 at age 74."

This section lists the memorials where the subject on this page is commemorated:
Lord Alfred Douglas

The plaque was unveiled by actor Russell Tovey and Mayor of Wandsworth, Lesli...

Isabella Ormston Ford was a social reformer, suffragist and writer. She becam...

Central President of the Mothers' Union in 1925. We found reference to a publ...