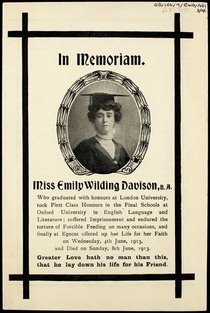 Militant suffragette. Born Roxburgh House, Vanbrugh Park Road, Greenwich (see Running Past for info about the house). Brought up in Hertfordshire until aged 11 when the family returned to London. Her university education was disrupted due to her father's death but still she achieved first class honours in English at Oxford University c.1893. She was not allowed a degree since Oxford did not allow women to take degrees. So she did it all again at University College London and they, being more enlightened, awarded her a degree in 1908.

1906 joined the Women's Social and Political Union and by 1909 she was full-time dedicated to its work. From Wikipedia: "she was arrested on nine occasions, went on hunger strike seven times and was force fed on 49 occasions".

Census boycott
In protest at women’s exclusion from the franchise suffrage organizations decided to boycott the 1911 census: "if women don't count, neither shall they be counted". To avoid the count Davison decided to hide in the cupboard at the Palace of Westminster. However she was found there in the morning by a cleaner and was recorded on a census return by the Clerk of Works at the Palace.

The extent of this boycott could not be assessed until 2009 when the census was released and even then it was difficult. History Workshop Journal have a very long report on one attempt and the outcome seems to be that many women who might have been expected to avoid the census were actually counted.

Death
On 4 June 1913 Davison travelled by train, with a return ticket and two suffragette flags, to Epsom racecourse where she attended the Derby. Her actions are caught on grainy news reel footage. She waited at Tattenham Corner and as the horses came round onto the home straight she ducked under the guard rail and possibly attempted to attach the flags to the reins of the king's horse. The collision knocked her, the horse and the jockey to the ground. Horse and jockey survived to race at Ascot two weeks later. Davison's injuries caused her death 4 days later at Epsom Cottage Hospital. The BBC have a good page on the event. The return ticket is of interest since it possibly points to Davison's actions not being an intentional suicide.

We can't discover where the 'Wilding' comes from. Her parents' surname was simply Davison and Wilding was not her mother's maiden name (Caisley). She never married.

2013: there was a campaign for a statue of Davison in the Houses of Parliament and again in 2014.

This section lists the memorials where the subject on this page is commemorated:
Emily Wilding Davison

{Surrounding the Epsom and Ewell Borough arms with the motto 'None Such':} Ou...

See Davison's page for an explanation of this plaque. While still thinking a...

Born in Bromley-by-Bow as Lucy Minnie Rogers. She worked in sweated labour sh...