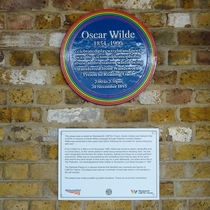 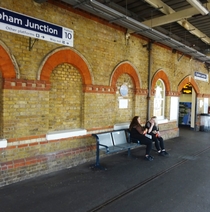 {Circular, rainbow ringed, plaque:}
Oscar Wilde 1854 - 1900
Celebrated playwright and poet, was the victim of homophobic abuse at this station whilst being transferred from Wandsworth Prison to Reading Gaol.
2.00 to 2.30 20 November 1895.

{Rectangular plaque:}
This plaque was unveiled by Wandsworth LGBTQ+ Forum, Studio Voltaire and Network Rail in 2019, in memory of Oscar Wilde's passage through Clapham Junction Station.
Wilde was sentenced to two-years hard labour following his conviction for "gross indecency with men".

From 2.00 pm to 2.30 pm on 20 November 1895, Wilde was forced to stand, handcuffed and in convict dress, on the 'centre platform' whilst being transported to Reading Gaol. He was soon recognised and became the object of jeering, spitting and abuse as a crowd gathered around him. Wilde was so traumatised by the humiliating event that he wept at the same time and for the same length of time every day for a year afterwards. He writes about this in 'De Profundis', his autobiographical letter written to his partner Lord Alfred Douglas in 1897.

The Rainbow Plaque is a national scheme that identifies key moments and figures of LGBTQ+ history. This plaque also acts as a reminder of how hate crime is not tolerated in the rail industry.

This plaque was made possible by public donations. Thank you to all who contributed.

The plaque was unveiled by actor Russell Tovey and Mayor of Wandsworth, Leslie McDonnell.

This section lists the subjects commemorated on the memorial on this page:
Oscar Wilde - Clapham Junction

Former prison on Forbury Road in Reading. Designed by George Gilbert Scott. I...

A category B men's prison on Heathfield Road SW18, known as the Surrey House ...

This section lists the subjects who helped to create/erect the memorial on this page:
Oscar Wilde - Clapham Junction

We have seen a map showing the London parishes of 1877 which shows a major bo...

{Beneath the McDonald's 'Golden Arches' logo:}3000We dedicate the opening of ...