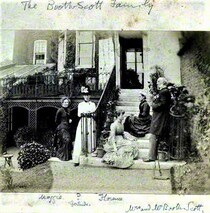 He married Emily Murley Porter (1825-1901), the marriage being registered in the 4th quarter of 1846 in the Yeovil registration district, Dorsetshire, and they had nine children. Our image shows him and his wife with three of their daughters.

In the 1851 census he is shown as a surveyor living at Parvis Cottage, Parvis Place, Kentish Town, with his wife, their daughter, Florence Germaine Scott (1849-1933) and a female house servant. On 4 December 1855 he was initiated as Freemason in the Albion Lodge No.9 that met at Freemasons' Tavern, Great Queen Street, London, giving his occupation as a civil engineer of Haverstock Hill. He was a Lieutenant in the Victoria Rifles and along with nine other freemasons, he petitioned the United Grand Lodge of England for a new lodge to be created. On 4 June 1860 they granted a warrant to form the Victoria Rifles Lodge No.1124 which initially met at the Queen's Arms Hotel, 1 High Road, Kilburn. The 1861 census describes him as a civil engineer & surveyor residing a 7 Parvis Place, Kentish Town, with his wife, three children: Herbert J. Scott (1856-1916), Edwin Claud Porter Scott (1856-1928) and William Hewlett Scott (1858-1889), together with a nurse and a female general servant.

Electoral registers in 1868 show him entitled to vote as owning a freehold house at 26 Abingdon Street, Westminster, but whose abode was recorded as 93 Adelaide Road, Primrose Hill, London. He was shown as a civil engineer in the 1871 census living at 16 Church Row, Hampstead, with his wife, six children: Florence G. Scott, Sophia Alice Maude Scott (1852-1891), Edwin C.P. Scott, William H. Scott, Montague J. Scott (1862-1947) and Emily Margaret Booth Scott (1864-1928), together with a nurse, a cook and a housemaid.

This section lists the memorials where the subject on this page is commemorated:
William Booth Scott

This section lists the memorials created by the subject on this page:
William Booth Scott