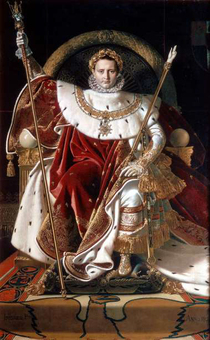 Military and political leader. Born at Ajaccio, Corsica. He trained as an officer in France and achieved prominence under the first French Republic. He led successful campaigns against the first and second coalitions, and in 1799 staged a coup d'etat, becoming a first consul. Five years later the French senate declared him Emperor. His conquests during the early nineteenth century, brought virtually all Western Europe under his control. His failed attempt to invade Russia in 1812 was a turning point in his fortunes, and in 1813, the sixth coalition defeated his forces at Leipzig and exiled him to the island of Elba. Less than a year later, he escaped and regained power. Following his defeat at the Battle of Waterloo in 1815, he spent the last six years of his life confined by the British on Saint Helena. His body was eventually returned to France and buried in Les Invalides. This period of fighting with the French was known in Britain as the Napoleonic Wars.

This section lists the memorials where the subject on this page is commemorated:
Napoleon Bonaparte

If the erection date of September 2009 is correct, it seems rather strange to...