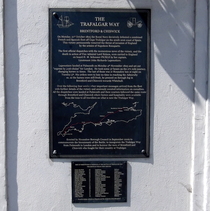 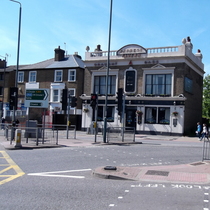 {Upper plaque:}
The Trafalgar Way
Brentford & Chiswick
On Monday 21st October 1805 the Royal Navy decisively defeated a combined French and Spanish fleet off Cape Trafalgar on the south west coast of Spain. This victory permanently removed the threat of invasion of England by the armies of Napoleon Bonaparte.

The first official dispatches with the momentous news of the victory, and the death in action of Vice Admiral Lord Nelson, were carried to England on board H.M. Schooner Pickle by her captain, Lieutenant John Richards Lapenotiere.
Lapenotiere landed at Falmouth on Monday 4th November 1805 and set out "express by post-chaise" for London. He took some 37 hours to cover the 271 mile journey, changing horses 21 times. The last of these was at Hounslow late at night on Tuesday 5th. His orders were to lose no time in reaching the Admiralty so, as the horses were still fresh, he pressed on through fog in Brentford and Chiswick towards Whitehall.
Over the following four weeks other important messages arrived from the fleet with further details of the victory and anxiously awaited information on casualties. All the dispatches were landed at Falmouth and their couriers took the same route through Brentford and Chiswick where horses and hospitality were available from the inns to all travellers on what is now The Trafalgar Way.
Erected by Hounslow Borough Council in September 2009 to commemorate the bicentenary of the battle; to inaugurate The Trafalgar Way from Falmouth to London and to honour the men of Brentford and Chiswick who fought for their country at Trafalgar.

{At the top, the plaque depicts a sailing ship and a carriage. Lower down is a map showing the route of the Trafalgar Way.}

If the erection date of September 2009 is correct, it seems rather strange to commemorate the bicentenary four years late. The other plaques we have found for the Trafalgar Way give the correct date of 2005.

This plaque is a rare thing - a war memorial naming the enlisted men who died in a war prior to 1900. Admittedly it was erected quite recently, but still rare.

This section lists the subjects commemorated on the memorial on this page:
The Trafalgar Way - Brentford

men of Brentford and Chiswick who fought at Trafalgar

This section lists the subjects who helped to create/erect the memorial on this page:
The Trafalgar Way - Brentford

This section lists the other memorials at the same location as the memorial on this page:
The Trafalgar Way - Brentford

This way was called Fountain Court until 1883 from the Fountain Tavern which ...