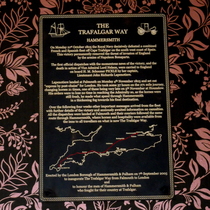 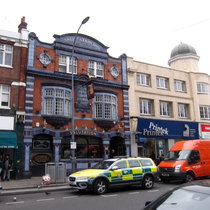 The Trafalgar Way
Hammersmith
On Monday 21st October 1805 the Royal Navy decisively defeated a combined French and Spanish fleet off Cape Trafalgar on the south west coast of Spain. This victory permanently removed the threat of invasion of England by the armies of Napoleon Bonaparte.

The first official dispatches with the momentous news of the victory, and the death in action of Vice Admiral Lord Nelson, were carried to England on board H. M. Schooner Pickle by her captain, Lieutenant John Richards Lapenotiere.

Lapenotiere landed at Falmouth on Monday 4th November 1805 and set out "express by post-chaise" for London. He took some 37 hours to cover the 271 mile journey, changing horses 21 times, one of these being very late on 5th November at Hounslow. His orders were to lose no time in reaching the Admiralty so, as the horses were still fresh, he made what speed through Hammersmith in a thickening fog towards his final destination.

Over the following four weeks other important messages arrived from the fleet with further details of the victory and anxiously awaited information on casualties. All the dispatches were landed at Falmouth and their couriers took the same route through Hammersmith, where horses and hospitality were available from the inns to all travellers on what is now The Trafalgar Way.

Erected by the London Borough of Hammermith & Fulham on 7th September 2005 to inaugurate The Trafalgar Way from Falmouth to London and to honour the men of Hammersmith & Fulham who fought for their country at Trafalgar.

{At the top the plaque depicts a sailing ship and a carriage. Lower down is a map showing the route of The Trafalgar Way.}

The oval plaque on the outside of the building reads:
"An old coaching inn has stood on this site since circa 1750. It was proud then, as it is now of its traditional beers, travellers fayre (sic) and warm welcome".

This section lists the subjects commemorated on the memorial on this page:
The Trafalgar Way - Hammersmith

men of Hammersmith & Fulham who fought at Trafalgar

This section lists the subjects who helped to create/erect the memorial on this page:
The Trafalgar Way - Hammersmith

London Borough of Hammersmith and Fulham

London borough. Formed by the merging of the Metropolitan Borough of Hammersm...

In grateful memory of Alderman Charles Fisher Yates JP, an ardent worker for ...

This plaque surely should have been designed with the Clarendon typeface, jus...

This plaque is smaller than usual and not the expected ceramic. We think it w...

Acquired from the trustees by the Corporation of The City of London, 2nd Febr...