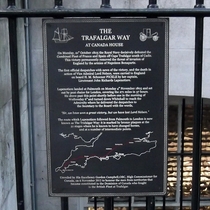 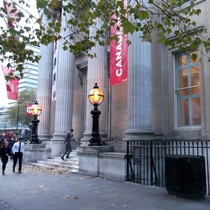 The Trafalgar Way at Canada House

The first official despatches with news of the victory, and the death in action of Vice Admiral Lord Nelson, were carried to England on board H.M. Schooner Pickle by her captain, Lieutenant John Richards Lapenotiere.

Lapenotiere landed at Falmouth on Monday 4th November 1805 and set out by post chaise for London, covering the 271 miles in 37 hours. He drove past this point shortly before one in the morning of Wednesday 6th and turned down Whitehall to reach the Admiralty where he delivered the despatches to the Secretary to the Board with the words "Sir, we have won a great victory, but we have lost Lord Nelson."

The route which Lapenotiere followed from Falmouth to London is now known as the the Trafalgar Way: it is marked by bronze plaques at the 21 stages where he is known to have changed horses, and at a number of intermediate points.

Unveiled by His Excellency Gordon Campbell, OBC, High Commissioner for Canada, on 6 November 2012 to honour the men from territories that became constituted in the Dominion of Canada who fought in the British fleet at Trafalgar.

{At the top, the plaque depicts a sailing ship and a carriage. Lower down is a map showing the route of the Trafalgar Way.}

This section lists the subjects commemorated on the memorial on this page:
The Trafalgar Way - Canada House

The popular image of the navy in Nelson's time, is of ships manned solely by ...

This section lists the subjects who helped to create/erect the memorial on this page:
The Trafalgar Way - Canada House

Canadian diplomat and politician. Born in Vancouver. He was the 34th Premier ...

To the glory of God and in grateful remembrance of Mary Elizabeth Sumner who ...