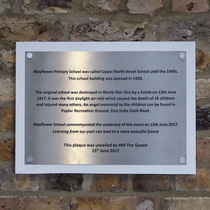 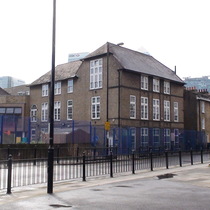 Mayflower Primary School was called Upper North Street School until the 1940s. This school building was opened in 1928. The original school was destroyed in World War One by a bomb on 13th June 1917. It was the first daylight air-raid which caused the death of 18 children and injured many others. An angel memorial to the children can be found in Poplar Recreation Ground, East India Dock Road.

Mayflower School commemorated the centenary of this event on 15th June 2017.

Learning from our past can lead to a more peaceful future.

Plaques 1 and 2 are inside the school and we are very grateful to Stan Kaye who enabled our visit. He also showed us a display of photographs from the Queen's visit, which he helped organise.

Plaque 3 is on the wall near the entrance to the school, behind the railings.

Stan tells us that the school was opened in 1848 with 458 pupils and staff. Following the bombing it was rebuilt in 1928 and renamed in 1950, partly to dissociate from the tragedy in the past. Stan is searching for an image of the 1848 building. If you have one please contact us.

2020: East London Advertiser has photos of the clearing up after the bomb and also of the Queen's 2017 visit.

This section lists the subjects commemorated on the memorial on this page:
Upper North Street School - plaque 2

This section lists the subjects who helped to create/erect the memorial on this page:
Upper North Street School - plaque 2

This section lists the other memorials at the same location as the memorial on this page:
Upper North Street School - plaque 2

Theatreland - heart of the performing arts in London. Alhambra Theatre On thi...