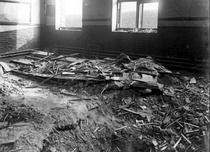 Only 10 when caught in the cross-fire during the Tottenham Outrage.