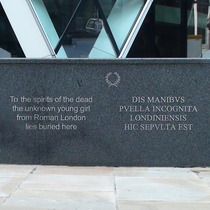 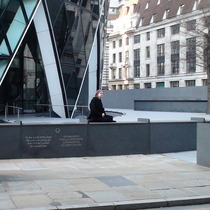 {Below a wreath:}
To the spirits of the dead, the unknown young girl from Roman London lies buried here.

{Our Latin expert, David Hopkins, tells us that “Dis manibus” is a standard phrase of dedication to the “Manes”, the spirits of the dead.  Effectively they are being warned that there’s another one on the way.}

{On the ground in front of this text is a dark grey slab also bearing an incised wreath. This presumably is the actual burial site.}

Prior to every development in Central London MOLA gets the opportunity for archaeological investigations.   Here in 1995 they found, among other Roman remains, the skeleton of a young Roman girl who had been buried over 1600 years ago.  The remains were taken to the Museum of London while the Swiss Re Tower was erected and in 2007, 12 years later, were reburied at the original site.

Foster + Partners have photographs of the procession and dedication ceremony and: “The skeleton was that of a young person of around 13-17 years of age, probably a young woman …. appeared to be an isolated burial and not part of a cemetery …. The burial would have lain just outside an early boundary ditch marking the edge of the Roman city. The body was supine, with the head to the south and the arms folded across the body (with the right forearm over the left). Pottery found in association with the burial has been dated to AD 350-400.”

The ceremony was attended by the Lady Mayoress, i.e. the wife of the Lord Mayor who was John Stuttard.  Looking this up we discovered that there has only ever been one female Lord Mayor.  Shame on you, City of London.

The reburial was accorded proper ceremony.  First a service was held at St Botolphs Church, Aldgate.  Then a procession to the burial site was followed by “a dedication with music and libations”.

This section lists the subjects commemorated on the memorial on this page:
Roman girl

Buried "just outside an early boundary ditch marking the edge of the Roman ci...

The Latin translates as "Work with all your might" and we think this may have...