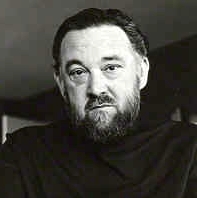 Broadcaster, writer and performer. Born Michael Henry Flanders in Hampstead. He served in the Royal Navy Volunteer Reserve, but contracted poliomyelitis and spent the rest of his life as a wheelchair user. He teamed up with his former schoolfriend Donald Swann in 1948, and wrote the lyrics for many comic songs including 'The Hippopotamus Song' and the 'Gnu Song'. The pair enjoyed worldwide success in their shows 'At the Drop of a Hat' and 'At the Drop of Another Hat'. Died suddenly in Betwys-y-Coed, Wales.

This section lists the memorials where the subject on this page is commemorated:
Michael Flanders