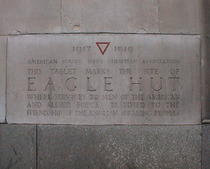 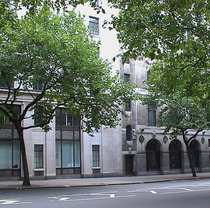 1917 1919
{between these dates there is a red triangle pointed downwards}
American Young Mens Christian Association.
This tablet marks the site of Eagle Hut where services to men of the American and Allied Forces testified to the friendship of the English speaking peoples.

Although very simple this is a quality plaque. The text is carved in a serif typeface and the red triangle is neatly made with small segments of a brick-like substance. The whole shows no weather damage after almost 100 years.

The red triangle was first used as part of the symbol for the YMCA in 1895.

From Criterion Auctioneers: "When the hut finally closed a dance was held to mark the occasion. A decade later, the then US ambassador, AB Houghton, unveiled a plaque to be placed in the wall of the buildings on the site of the Eagle Hut, “paid for by the ‘Eagle Hutters’, a group of American businessmen who had volunteered at the hut during the war”. Since the hut closed in 1919 this means that the plaque was unveiled c.1929. We know the wings of Bush House were not completed until 1935 which suggests the plaque was carefully kept in store for possibly 6 years, and someone remembered to erect it!

The plaque is low down on the wall just before the boundary with the next building.

See Bush House for information about these buildings. The development of the area meant that in 1917 the site had been cleared but that, due to the war, this section at least, was still vacant and likely to be so for some time, and was thus available for the temporary Hut. Also, the land was probably owned by the American businessman, Irving T. Bush who, we're guessing provided the land, and possibly the construction too, as part of the war effort.

This section lists the subjects commemorated on the memorial on this page:
Eagle Hut - WW1

men of the American and Allied Forces

From Heritage Images (link now dead): "The Eagle Hut was designed as a centre...

The site of this building forms part of what was once the precinct of the Pri...

{Around an illustration of the Crystal Palace:}The grave beneath this yew tre...