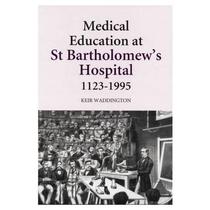 From the picture source website: "Prisca Coborn, the widow of a brewer, found...

Set up by the London Diocesan Board for Schools. It opened as a result of a c...