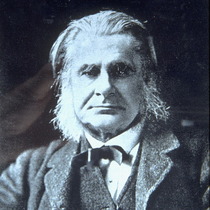 Biologist and anthropologist. Born Ealing. An early adherent to Darwin's theory of evolution, he was a strong supporter while also pointing out what he saw as flaws. At the Royal College of Science (which would later become Imperial College): Professor of Biology 1854 -95, the first Dean of the College 1881-95. His son Leonard (author) was father to: Sir Julian (biologist), Aldous (author) and Sir Andrew (physicist). Bonus fact: two of Thomas's daughters married the same man. Died at home in Eastbourne.

2021: The Guardian reported that Imperial College's independent history group investigated the college's historical links to the British empire. The subsequent report called for a building at the college named after Huxley,  to be renamed due to his racist beliefs about human intelligence. The report said Huxley’s essay Emancipation – Black and White “espouses a racial hierarchy of intelligence, a belief system of ‘scientific racism’ that fed the dangerous and false ideology of eugenics; legacies of which are still felt today”.  The report also called for a bust of Huxley to be removed from display and placed in the college archives.

2022: the Imperial College Huxley debate continued. A letter from 39 leading scientists was published in the Telegraph, arguing the case for a more nuanced assessment of Huxley's achievements over his whole career.

This section lists the memorials where the subject on this page is commemorated:
Thomas Huxley