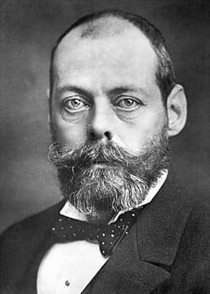 Politician. Father of Winston. Born at 3 Wilton Terrace, son of the 7th Duke of Marlborough of Blenheim Palace. 1874 married an American Jennie Jerome and Winston was their first child. (After Randolph's death Jennie, who had had a number of affairs during the marriage, including with Edward VII and King Milan I of Serbia, married twice more, the second husband being the same age as Winston and the third being three years younger than Winston.) Held the positions Chancellor of the Exchequer and Leader of the House of Commons. The picture source makes out the case for him being Jack the Ripper. Sounds like an eminently sensible theory to us, at least as sensible as the evidence behind all the other suspects, of which we now have quite a few.

This section lists the memorials where the subject on this page is commemorated:
Lord Randolph Churchill

When this misconceived museum opened, its planning application had described ...