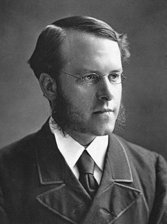 Missionary and social worker with the British poor, especially children. Born Thomas John Barnardo in Dublin with a Prussian father. "Brought to Christ" in 1862. Arrived at 30 Coburn Street in 1866, on his way to be a missionary in China. Whilst waiting to be accepted he started studying medicine at the London Hospital and began missionary-type work in the East End. He never qualified but used the title 'Doctor' and even forged qualifications. Supported by Lord Shaftesbury he opened the first "Dr Barnardo’s Home" for children in 1870.

The Edinburgh Castle was a pub in Rhodeswell Road, Limehouse which Barnardo took over and re-opened in 1873 as the British Working Men's Coffee Palace. 1876 opened the Girls' Village Home in Barkingside.

When he died the charity he had founded was running 96 children's homes. Died at Leonard's Lodge, his home in Surbiton. One of his daughters, Syrie, married first Henry Wellcome and then Somerset Maugham. She was an interior designer in the 1920s and 30s, credited with creating the first white room - see the Library Time Machine.

Like many working in this field, Barnardo campaigned against prostitution. This brought him into contact with prostitutes and consequently he has been named as a candidate for Jack the Ripper.

At the Dignity Funeral Museum in Rosebery Avenue we read that Barnardo was one of only two people who made the journey to their final resting place courtesy of the tube: Gladstone and Barnardo. So we investigated Barnardo's death. From Surbiton his body was taken to lie in state for 3 days at the Edinburgh Castle and was then processed through the streets to Liverpool Street Station. From here it was taken to Barkingside where he was buried, in what is now Barkingside Park/Recreation Ground. We can't find it specifically stated anywhere but the Central Line provides an excellent connection from Liverpool Street Station to Barkingside, so it seems that was the chosen means of transportation.

This section lists the memorials where the subject on this page is commemorated:
Dr Barnardo

This plaque contradicts English Heritage's rules about erecting only one plaq...

Barnado Gardens. This block was built by the London County Council in 1957. I...

Campaigner and community activist. Daughter of Sir Alan Herbert, she lived in...