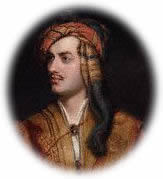 Byron was buried in St. Mary Magdalene Hucknall, near Nottingham.

2022: Listening to BBC’s “Mark Steel’s In Town, Nottingham” we were entertained to hear this phallocentric story:  In 1938 the vicar at the church, Canon Houldsworth, wanted to confirm that Byron’s body was indeed in the vault.  Permission to open the vault was granted on condition that a representative of government was present so a local MP, Seymour Cocks, was one of a party of around 40 people who, on 15 June 1938, gathered for the opening. Byron’s body was found as expected. Flashbak has a gruesome description of the state it was in, which was “excellent”, including “His sexual organ shewed quite abnormal development.” The BBC programme reports Houldsworth as describing how the body looked: “he was built like a pony.” The programme gives their source for the story as an article written by the journalist Byron Rogers.